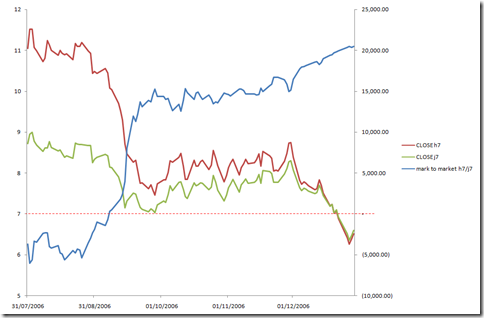 I happen to be a teacher in a futures workshop for UFM’s business school for the students on the financial carrer, MFIN. We checked the Amaranth’s case and we came up with the idea of replaying this strategy.

Amaranth’s leverage, according to the written case published at a financial journal, was 1:5. There you can see a little negative spike of -$3700 to -$6040, meaning a 60% movement against the position. Using a 1:5 leverage means that we control $100 worth using, or having, only $20; so if the position moves 5% against us [which is quite natural in this mkt] we are losing 5/20 or 25% of the position.

What seems was the Amaranth’s case is that they got at leas a 50% adverse move which means an imminent wipe out.

They got plenty of margin calls, phone calls from the exchange and all of that ended in convocation of other nat gas traders to take care of these positions.

As the chart can tell, months later, the trade was a pure winner, but the trader wasn’t because misuse of leverage.

This make thing of a baseball play. Two men on base, double play setup in the infield. I am a left hand pitcher facing a right and weak hitter. As I prepare for facing the hitter, the center fielder stars arguing with the short stop about his way of playing. They finally calm down, although the SS refused to hear what the other guy was saying, so I come up with the pitch [inside fastball] and nice and easy ground ball goes by the short stop position, but he couldn’t get it because did not move himself as the CF was telling him. Nice strategy, poor risk management. We ended up facing about 5 more hitters and finally lose the game.